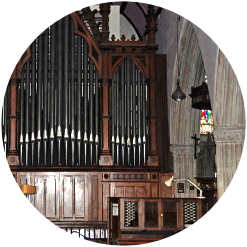 Our historic organ, acknowledged as such, and generally regarded as one of the finest in the south-west, has been installed in the church now for over 30 years. The reason it is an historic instrument is that tonally, it has been unchanged since Henry Willis installed it in Sherwell Church, Plymouth back in 1864.  This is unusual, as, more often than not, organs are changed or 'modernised' in some way as the years go by. In our case, the playing console was modernised most effectively, but the pipes that make the actual sound were not. So, we have a 'vintage' Willis.

The decision to move the organ to Torrington back in 1989 was a bold one, and since then it has done sterling service and been enjoyed by thousands in services, solo recitals, broadcasts, recordings and as an accompanying instrument: choirs enjoy singing here because we have such a special organ.

It still sounds superb,  but the time has come to clean and overhaul the organ. Rather like a car, it may look the same on the outside, but there are a huge number of mechanical, electrical and perishable parts which are subject to wear and deterioration. This is the mechanism  which connects the keyboards to the inside of the organ and makes the pipes speak, and which of course most people never see!
In addition, dust and dirt from occasional leaks, dampness in the walls and various building works over the years also mean the pipes need a good clean.

A recent recitalist described the sound of the organ as 'absolutely magnificent' but the 'action' (how the player makes the pipes speak) as 'absolutely dreadful'  !!

Lance Foy, who moved and installed the organ and has looked after it ever since, considers the cost would be £30,000 – 40,000. A formidable amount, but as the organ becomes increasingly unreliable, one we cannot avoid for much longer.

So we have  embarked on fund-raising for the work, and if you have enjoyed the organ at any time and wish to make a donation, the church has an established organ fund which you should stipulate your gift goes towards. We would be most grateful.